Explore the medieval heartlands of Tipperary and discover centuries of drama, romance, intrigue and deadly rivalries as you follow in the footsteps of the powerful Butler dynasty.

For more than five turbulent centuries the Butlers were the most powerful aristocratic family in Tipperary and they left an indelible mark. They raised armies and went into battle with rival families, sometimes fighting with and other times against the English Crown.

They built numerous fine castles and houses, both for defensive purposes and as ostentatious displays of their wealth. They sponsored the establishment and embellishment of abbeys and churches which still stand to this day.

Spot the cannonball in the walls of Cahir Castle, take a romantic stroll along the river to the irresistibly romantic Swiss Cottage, delight in a visit to the restored former courthouse at the Main Guard, or explore a house built for a queen at Ormond Castle.

The Butler Trail is fantastic journey through time that takes you around Cahir, Clonmel and Carrick-on-Suir in the south-east of Tipperary, and also Nenagh, Roscrea and Thurles in the north and west of the county. It reveals the influence and impact the Butler family dynasty had on the physical, social and economic fabric of these Tipperary towns and communities, and the legacy they left behind.

There is interpretive signage to guide and inform you along the route in each town. You can download The Butler Trail App & Audio Guide on iTunes or Google Play and immerse yourself in this network of remarkable stories told through the landscape of Ireland’s Ancient East.

Download the Butler Trail app on iTunes and Google Play. The app includes three audio trails (available in English, French and German) and a travel guide of Ireland’s Ancient East. These trails will guide you around the ancient towns of Cahir, Clonmel, Carrick-On-Suir and Roscrea, revealing a network of stories – set in a landscape stretching out over 5,000 years.

Check out The Butler Trail Itinerary from here: https://tipperary.com/itinerary/48-hours-on-the-butler-trail/ 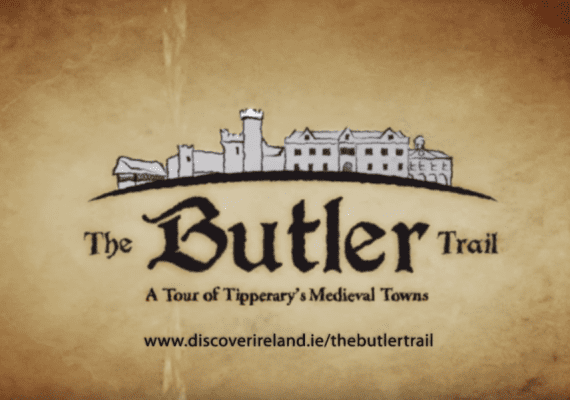 This beautiful and historic town is where the Butler Family grew to power. The Butlers first settled here in the 13th Century. Thomas ‘Black Tom’ Butler, the 10th Earl of Ormond (1532-1614), was the most colourful and influential family member who lived here.

Black Tom built a fine manor house as part of Ormond Castle in the 1560s in expectation of a visit from his cousin Elizabeth I, daughter of Henry VIII and Ann Boleyn. Unfortunately Elizabeth never visited at all.

Find out more about their-much- talked-about relationship on a tour of Ormond Castle, Ireland’s only surviving unfortified Tudor Manor House which contains beautiful details including decorative plasterwork portraits of Elizabeth I.

Cahir, a romantic and charming small town, grew up around Cahir Castle which was originally a fort built on a rock in the River Suir. The town became a stronghold of the Butler family. The Manor of Cahir was granted to James Butler, 3rd Earl of Ormond in 1375, and afterwards to his son, James Gallda, ancestor of the Cahir Butlers.

Cahir Castle is one of Ireland’s largest and best-preserved castles. It was famously besieged by the Earl of Essex in 1599. A cannonball can still be seen in one of the walls. It remained under the ownership of the Butlers until 1961. A visit is a must.

Under Richard Butler, 1st Earl of Glengall (1775-1819), and his wife, Cahir became a fashionable place for gentry. In the early 1800s he built the delightful Swiss Cottage, a cottage orné designed by John Nash and the finest eco building of its time. Cahir House, now a hotel, was the town house of the Butlers from the 1770s.

Nestled in the valley of the River Suir, Clonmel is a thriving and bustling town. Once the
administrative centre of the Butlers, Clonmel today is the county town of South Tipperary. James Butler, the 12th Earl and 1st Duke of Ormond (1610-88), was a grandnephew of Black Tom. James was arguably the Butlers’ most important family member, being the most influential Butler in Ireland’s history.

James built the Main Guard in Clonmel in 1675 and King James II visited in 1689. Visit the Main Guard to learn more about James’ influence on Clonmel, his role in the English Court and his lasting legacy in Ireland.

Clonmel is steeped in a hidden history which is waiting to be explored, including the site of the famous Cromwellian siege, its town walls and the county museum.

Discover the Butler’s connection with a visit to Roscrea. Discover how the Butlers of Ormond gained power and influence in almost every large town of Tipperary, including Roscrea.

There is a strong connection between Roscrea and ‘Black Tom’ Butler, the 10th earl of Ormond who returned home from England to take control of the town. Discover how Roscrea lay on the northern edge of the County Palatinate of Tipperary and the Butlers historic influence within Roscrea.

Download your free audio guide to Fethard on www.fethard.com. Wander through the medieval walled town of Fethard and imagine the town as it was in its heyday. Relive the stories of the past and visit the ruins of fortified tower houses , the 13th – century Holy Trinity Church and the 14th- century Augustinian Friary. Immerse yourself in the Fethard Horse Country Experience, which tells the interlinked story of the relationship between the people, the land and the horse. Afterwards, head to McCarthy’s of Fethard for a unique Irish experience. A pub, restaurant and undertakers, McCarthy’s promises to “wine you, dine you and bury you”.

The town of Tipperary was established around 1200 by the Norman William de Burgh. Tipperary was important enough in the 13th century to give its name to the county and growth was helped when Augustinian friars came to the town around 1300. The primary attraction of the town of Tipperary is its setting. Spread across a hill facing south, the town is a short drive from Slievenamuck and the Galtees, twin guardians of the famed Glen of Aherlow. In the words of a local poet, the relationship between these two elevations is like that of a ‘fond mother guarding a child’. Before there was a town, there may have been a well that gave its name to both town and county. This was the Well of Ara (in the Irish language Tiobraid Árann, which became Tipperary), of importance to travellers as they moved between the two most important places in the region: Cashel of the Kings and the monastery of Emly. Explore Tipperary Town on foot following the Historic Town Trail which starts at Tipperary Excel Heritage Centre.